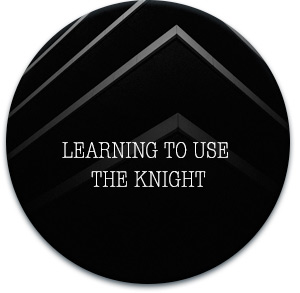 Learning to use the knight

Every piece in the game of chess has its own strengths and weaknesses. Even the seemingly weakest piece of the game, the pawn, can eventually get promoted to a queen and help you win the game by a landslide. So, it’s important not to underestimate the pieces that you have at your disposal. It’s also important not to overestimate them either – even the most powerful piece of the game, the queen, can be caught overextended and be captured by a pawn in extreme cases.

So, today we will talk a little bit more about the knight. This piece t is the most unique piece of the entire chess board. This uniqueness comes from the moving pattern of the piece – it doesn’t follow the traditional movement capabilities of the other pieces, like moving vertically or diagonally in one line. The way the night moves is two squares vertically and one horizontally, or two squares horizontally and one vertically. Also, one of the most unique aspects of any piece of the board belongs to the knight – the knight is the only piece that can jump over other pieces. This feature can be used in powerful ways if you know how to do so.

So, in what way will you want to use the knights? At the begging of the game, it’s recommended that you move them towards the middle. This is because of the fact that both players will typically fight for control of the middle as a vital part of the chess battle. And the knights can control the middle from a distance.

Fork with the knight

Another important thing that you can do with knights is the fork. Of course, you could do forks with all of the other figures, but the knight stands out because of the aforementioned fact that it can jump over other figures. So, one of the most powerful moves in the entire game of chess is the so-called grand fork, in which you will use your knight to attack your opponent’s king, queen, and rook – all at the same time. Of course, in this case, your opponent will have to move the king – provided that he cannot capture the attacking knight – and in most cases, you will want to take the queen as the most powerful piece of the board.

If you wish to learn how to use the knight, then there are several things that you can do. Because of its unique moving pattern, the knight can be a bit difficult to master. So, you will want to set a piece on any particular square on the board – and set your knight on any other particular square. Then you will want to visualize in your mind just how you will be able to capture your opponent’s piece with your knight in as little moves as possible. Rinse and repeat. Then you can add in other pieces as well – and you can try to capture them all with your knight in as little moves as possible.

So, if you’re dedicated and consistent – you too will be able to learn how to use the knight in a proficient way. This is a very powerful and often underutilized piece of the board – make sure that you learn how to use it if you wish to improve your game of chess.